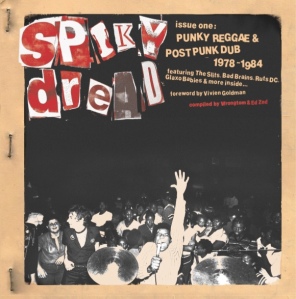 Buy your copy of our first compilation Spiky Dread: Issue One…

And if you need some convincing, have a listen below, and here’s what Boomkat had to say about it…

“14 absolute stunners from the UK’s melting pot of reggae and new wave culture circa 1978-1984. As any dedicated follower of British pop music knows, this was an era of social and economic flux, when the 1st generations of punks and immigrants from former colonies met on the dancehall’s level playing field. As New Age Steppers’ Vivien Goldman puts it best in the liner notes “Looking back, it’s clear that as we were getting to know Britain’s rapidly changing face, dub was our mirror”, and arguably, for the better, British pop music has played an irrevocably prominent global role because of this syncretic strengthening and consolidation of styles and sonic ideas ever since. We can safely say there’s not a duff cut on this CD (a vinyl comp would be even better!), coming from the likes of Jah Scouse – featuring members of Young Marble Giants, Essential Logic and This Heat – on the killer ‘Merge’ to Vivien Goldman’s cover of Bob Marley’s ‘Same Thing Twice’ with Chantage, thru Peter and the Test Tube Babies’ Clash-y killer ‘Trapper Ain’t Got a Bird’ or Sir Horatio aka A Certain Ratio’s wheezy ‘Sommadub’ and Bad Brains’ Afrobeat stepper ‘Stay Close To Me’. We may never see or hear another golden period quite like the one documented here, but as long its effects are still felt and remembered, thanks to CDs like this, we’ll be irie.”